A recent buy of a Ukrainian startup by a Google-owned company has given the nation a rare chance to shine globally. The multimillion-dollar deal between Motorola Mobility, an American telecommunications equipment corporation owned by Google, and Ukraine’s facial recognition technology company Viewdle was announced last month.

“Ukraine appeared on the world’s map of business ventures,” said Andriy Kolodiuk, managing partner at Aventures Capital, a venture firm focused on businesses in Ukraine and Russia. “When such a reputable company as Google buys a company it means the country’s (information technology sphere is becoming attractive) for investors.”

His company was the first in Ukraine with a similar experience in 2006, when it sold its stake of United Software Corporation to American fund DFG Nexus. It was focused on microsystems programming, mainframe services, financial, telecoms and other solutions.

“The test of the pen was made that time,” Kolodiuk said. The deal was worth just a few million dollars, according to him, but it was very important as with it “international venture capital has started flowing into Ukraine.” KEEP READING 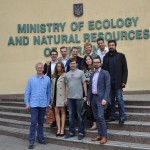